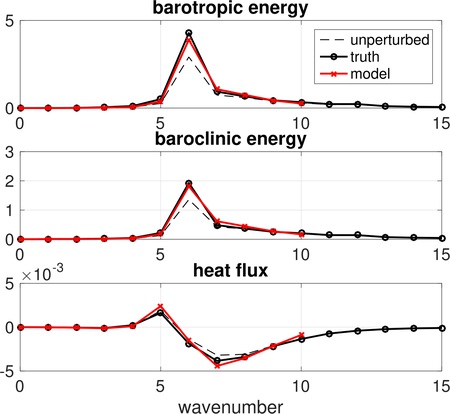 Model statistical responses captured by the the reduced order model

Turbulent dynamical systems characterized by both a high-dimensional phase space and a large number of instabilities are ubiquitous among many complex systems in science and engineering, including climate, material, andneural science. Climate change science focuses on predicting the coarse-grained planetary-scale long-time changes in the climate system due to either changes in external forcing or internal variability, where climate sensitivities are studied through a suite of imperfect comprehensive computer models compared with actual observed behavior. One central issue in contemporary climate change science is the development of a systematic methodology that can recover the crucial features of the natural system in statistical equilibrium (model fidelity) and improve the imperfect model prediction skill in response to various external perturbations (model sensitivity).

CAOS researchers, Andrew J. Majda and Di Qi have developed a general mathematical framework to construct statistically accurate reduced-order models that have skill in capturing the statistical variability in the principal directions with largest energy of a general class of damped and forced complex turbulent dynamical systems[1]. Recently, applications to two-layer baroclinic turbulence in the atmosphere and ocean with combinations of turbulent jets and vortices are surveyed. Especially, the model generates the anisotropic flow field with strong meandering zonal jets shifting in time in the low/midlatitude regime. The Uncertainty Quantification and statistical response for these complex models are accurately captured by the reduced-order models with only 2×102 modes in a highly turbulent system with 1×105 degrees of freedom. Less than 0.15% of the total spectral modes are needed in the reduced-order models.