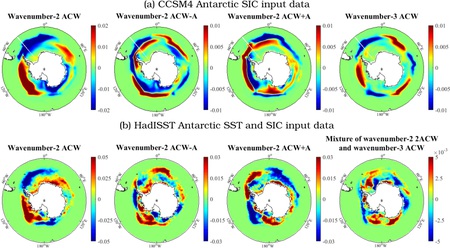 The dominant interannual mode of variability in the Southern Ocean, called the Antarctic Circumpolar Wave (ACW), plays an important role in the global climate, but its spatiotemporal structure, propagation characteristics, and associated physical mechanisms remain partly understood. In particular, a long-standing topic under investigation has been the role of tropical-extratropical forcing versus local atmosphere-ocean coupling in ACW dynamics.

In paper recently published at the International Journal of Climatology, CAOS researchers Xinyang Wang and Dimitris Giannakis, in collaboration with Joanna Slawinska at University of Wisconsin-Milwaukee, have studied ACW variability in model and observational data via Nonlinear Laplacian Spectral Analysis (NLSA), an objective eigendecomposition technique for nonlinear dynamical systems developed at CAOS by Dimitris Giannakis and Andrew Majda, which can simultaneously recover multiple intrinsic timescales from data. This study identified a hierarchy of ACW modes that delineates the fundamental eastward-propagating wavenumber-2 and 3 ACW signals, as well as combination frequencies between the ACW and the seasonal cycle exhibiting either eastward or westward direction of propagation and meridional pulsations. Together, these modes account for the complex propagation characteristics of the ACW The study also found that the wavenumber-2 ACW modes and its associated annual cycle combination modes can be consistently recovered from either Antarctic or tropical Pacific SST data, indicating that the El Nino Southern Oscillation (ENSO) is a likely driver, and thus informative predictor, of these patterns. In contrast, no such correspondence was identified for wavenumber-3 ACW modes, consistent with these modes being attributed to local sea-air interaction.