Understanding the atmospheric response to volcanoes 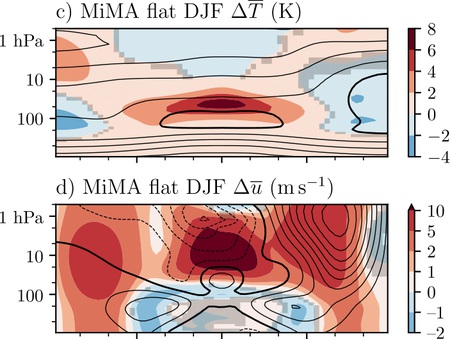 Large eruptions cool Earth's surface by sending aerosol into the stratosphere, where it can remain for a year or so. The cooling effect was appreciated by the ancient Romans, and discussed by Benjamin Franklin, who was interested in the effect across continents! With more complete observations, modern data shows that large eruptions also lead to warmer winters in parts of North America, Europe, and Asia. Simulating this accurately in a computational model is important, but model results have disagreed with one another in a number of ways.

In their paper, DallaSanta and coauthors showed that global cooling and warmer winters are both fundamental responses to volcanoes, even in very simplified models. However, observing the response can be difficult with the wrong method, or an insufficient number of eruptions. Understanding volcanic forcing and its underlying mechanisms is useful for interpreting complex model results and seasonal forecasts after future eruptions. The in-progress Volcanic Model Intercomparison Project will be an opportunity to test the ideas simultaneously in a number of models.