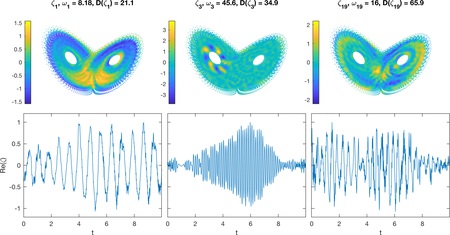 Approximate eigenfunctions for the Lorenz63 attractor

Recent work by Suddhasattwa Das, Dimitrios Giannakis, and Joanna Slawinska study a phenomenon / object called approximate eigenfunctions, which are present in every deterministic dynamical system, from the most chaotic ones such as climate models, or the more regular ones, such as the high dimensional torii which describe planetary motion. An approximate eigenfunction represents some near-periodicity in the dynamics, over certain time scales. These near periodic behavior could be localized spatially, or scattered over the entire domain. More importantly, these approximate eigenfunctions can completely reconstruct the dynamics in a manner that can be stated precisely using the language of operator theory, and Reproducing kernel Hilbert spaces. Patching together a collection of these local near-periodic patterns makes it possible to reconstruct  / forecast the dynamics over arbitrary time scales. Their paper lays down the rigorous theoretical basis for this universal feature of dynamics. The figure presented here shows three such approximate eigenfunctions for the Lorenz63 attractor, a classical 3-dimensional system used as a benchmark for studying methods designed for chaotic systems.