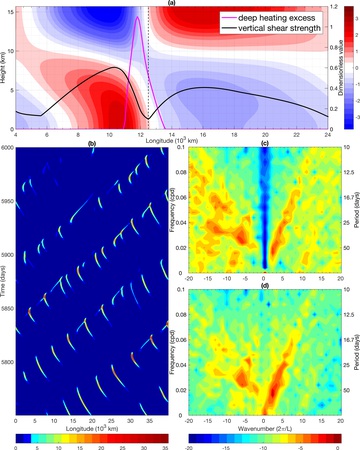 A recent study by CAOS researchers Qiu Yang and Prof. Andrew Majda in collaboration with Mitchell W. Moncrieff from NCAR investigates the upscale impact of mesoscale convective systems (MCSs) on the Madden-Julian Oscillation (MJO) in an idealized GCM. The MJO is observed to be organized in a hierarchical structure that the eastward-moving planetary-scale envelope usually contains multiple synoptic-scale superclusters with numerous embedded MCSs. Present-day GCMs fail to explicitly resolve MCSs due to their coarse resolutions. It is hypothesized that such inadequate treatment of MCSs and their upscale impact leads to the poorly simulated MJOs in the GCMs. So its parameterization should provide the missing collective effects of MCSs. However, a satisfactory understanding of the upscale impact of MCSs on the MJO is still lacking.

The study uses a simple 2D multicloud model to mimic typical behaviors of GCMs with clear deficiencies. Eddy transfer of momentum and temperature by the MCSs, predicted by the mesoscale equatorial synoptic dynamics (MESD) model, is added to this idealized GCM. The upscale impact of westward-moving MCSs promotes eastward propagation of the MJO analog, consistent with the theoretical prediction of the MESD model. Furthermore, the upscale impact of upshear- moving MCSs significantly intensifies the westerly wind burst because of two-way feedback between easterly vertical shear and eddy momentum transfer with low-level eastward momentum forcing. Finally, a basic parameterization of the upscale impact of upshear-moving MCSs modulated by deep heating excess and vertical shear strength significantly improves key features of the MJO analog in the idealized GCM with clear deficiencies. A three-way interaction mechanism between the MJO analog, parameterized upscale impact of MCSs, and background vertical shear is identified.