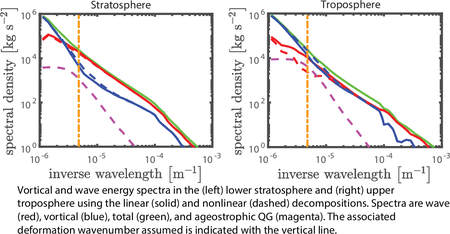 High-resolution observational data can offer crucial insights into the dynamics of turbulence, but they are often strongly confined in space or time. For example, ship or aircraft track data can reach down to spatial scales much smaller than synoptic scales, but they suffer from low temporal resolution, and are essentially aligned along one dimension (1-D) in space. Even a simplistic decomposition of the flow into different dynamical components can be challenging. How would one know more about dynamics from data that have such limitations?

CAOS researchers H. Wang and O.Bühler have developed a numerically robust algorithm to decompose the 1-D energy spectra obtained from ship/aircraft data sets into three components: the linear gravity wave, the geostrophic wind, and the first-order quasi-geostrophic(QG) ageostrophic flow.  The algorithm relies on the assumptions of stationarity in time, horizontal isotropy, and a simple vertical structure. Due to its nonlinear nature, the QG correction is especially challenging to be incorporated, which is one of the main achievements in the work. Wang and Bühler then applied the algorithm to aircraft data sets. In the lower stratosphere, the results confirm the popular conjecture that submesoscale spectra are dominated by waves, while in the upper troposphere, a definitive answer remains elusive. This work has been honorably selected to be featured in Focus on Fluids by Journal of Fluid Mechanics.