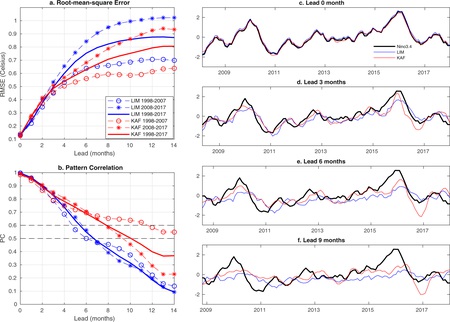 Forecasting the El Niño-Southern Oscillation (ENSO) has been a subject of vigorous research due to the important role of the phenomenon in climate dynamics and its worldwide socioeconomic impacts. Over the past decades, numerous models for ENSO prediction have been developed, among which statistical models approximating ENSO evolution by linear dynamics have received significant attention owing to their simplicity and comparable forecast skill to first-principles models at short lead times. Yet, due to highly nonlinear and chaotic dynamics (particularly during ENSO initiation), such models have limited skill for longer-term forecasts beyond half a year.

CAOS researchers Xinyang Wang and Dimitris Giannakis in collaboration with Joanna Slawinska of University of Wisconsin-Milwaukee have developed a nonparametric statistical forecasting technique for ENSO based on analog forecasting, called kernel analog forecasting (KAF), which avoids assumptions on the underlying dynamics through the use of nonlinear kernel methods for machine learning and dimension reduction of high-dimensional datasets. Through a rigorous connection with Koopman operator theory for dynamical systems, KAF yields statistically optimal predictions of future ENSO states as conditional expectations, given noisy and potentially incomplete data at forecast initialization. Using industrial-era Indo-Pacific sea surface temperature as training data, the method is shown to successfully predict the Niño 3.4 index in a 1998–2017 verification period out to a 10-month lead, which corresponds to an increase of 3–8 months (depending on the decade) over a benchmark linear inverse model (LIM), while significantly improving upon the ENSO predictability “spring barrier”. In particular, KAF successfully predicts the historic 2015/16 El Niño at initialization times as early as June 2015, which is comparable to the skill of current dynamical models. Probabilistic forecasts for the occurrence of El Niño/La Niña events are also performed and assessed via information-theoretic metrics, showing an improvement of skill over LIM approaches, thus opening an avenue for environmental risk assessment relevant in a variety of contexts.

This work was selected for publication in Nature's Scientific Reports