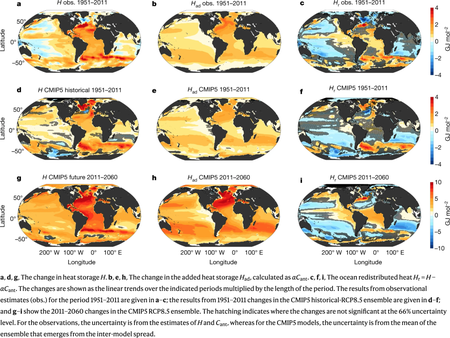 Scientists have discovered that human influence will increasingly shape ocean warming in the future while circulation changes will diminish as a factor affecting these waters’ temperatures. The implications of their results, published in the latest issue of the journal Nature, are significant given oceans’ role in regulating our climate and its change by absorbing heat and carbon. More specifically, regional sea level, affecting coastal populations around the world, depends on patterns of ocean warming.

In this study, the researchers showed how these patterns are likely to change. Their results imply widespread ocean warming and sea level rise, compared to the past, including increased warming near the eastern edges of ocean basins leading to more sea level rise along the western coastlines of continents in the North Atlantic and Pacific Oceans.

“In the future, the imprint of rising atmospheric temperatures on ocean warming will likely dominate that of changes in ocean circulation,” says Laure Zanna, a professor at New York University’s Courant Institute of Mathematical Sciences and one of the paper’s authors. “Initially, we might think that as the climate warms more, changes in ocean currents and their impact on ocean warming patterns will become larger. However, we show that this is not the case in several regions of the ocean.”

A new method was developed by Zanna and Ben Bronselaer, who began conducting this research while a Ph.D. student at Oxford University. It uses climate models to suggest that ocean warming patterns will increasingly be influenced by simple uptake of atmospheric warming, making them easier to predict. This is in contrast to the past 60 years, over which time circulation changes have been viewed as key factors in shaping ocean warming patterns.

Changes in ocean warming due to the simple uptake of atmospheric warming are easier to model and so the scientists hope that where previous models have struggled, they might become more accurate for future projections.

“I think it is an encouraging possibility that climate models, which struggle to simulate past ocean warming, might be better at predicting future warming patterns,” observes lead author Bronselaer. “Better prediction of warming patterns implies better prediction of regional sea level rise, which will help to mitigate climate impacts such as flooding on individual communities. Of course, we do need to understand predictions of ocean circulation better to solidify this result.

“During our research, we found a surprising relationship between ocean heat and carbon storage which appears to be unique. While there is a connection between these two quantities that is not yet fully understood, we think we have made significant progress towards uncovering it.”

The Nature study shows that the global ocean heat and carbon uptake go hand-in-hand, and the uptake rates are set by the present state of the ocean. This relationship is at the core of the method developed in this study.

As humans change the ocean state by adding more heat and carbon, the ability of the ocean to take up both heat and carbon will be altered. The scientists speculate that the later emissions are reduced, the slower the reductions in atmospheric surface temperature are likely to be, due to the coupling between heat and carbon uptake by the ocean.

These results highlight a deep and fundamental connection between ocean and carbon uptake, which has implications for atmospheric heat and carbon. While ocean carbon and heat are separate systems, this study shows that they are deeply interconnected, via the capacity of the ocean to absorb these quantities. These results help explain why atmospheric warming depends linearly on cumulative carbon emissions.

“We find that the ocean’s capacity to absorb heat and carbon are coupled, and constrained by the ocean state,” says Zanna, part of the Courant Institute’s Center for Atmosphere Ocean Science and a visiting professor at Oxford University. “This implies that the present ocean state will regulate surface warming whether CO2 emissions continue to rise or decline.

“The rates of ocean warming over the past 60 years have been significantly altered by changes in ocean circulation, particularly in the North Atlantic and parts of the Pacific Ocean, where we can identify cooling over some decades. However, in the future changes in ocean currents appear to play a smaller role on patterns of ocean warming, and the oceans will transport the excess anthropogenic heat in the ocean in a rather passive manner in these regions.”