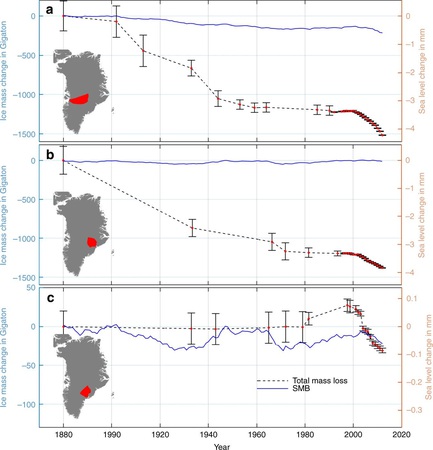 Combined with the much larger temperature increase predicted by the end of this century compared with that seen since the end of the Little Ice Age, the study suggests that climate model projections underestimate the worst-case mass loss from Greenland outlet glaciers. The Greenland Ice Sheet is currently the largest land ice contributor to sea level rise. This will continue in the future but at an uncertain rate and observational estimates are limited to the last few decades. Understanding the long-term glacier response to external forcing is key to improving projections. In this study we use historical photographs to calculate ice loss from 1880–2012 for three key Greenland outlet glaciers: Jakobshavn, Helheim, and Kangerlussuaq. We estimate ice loss corresponding to a sea level rise of 8.1 ± 1.1 mm from these three glaciers. The data improvement from the study shows that neither isostatic uplift of bedrock nor sea level lowering owing to a decrease in local gravity have had a major effect on glacier retreat and ice mass loss during the past century of global warming.   Projections of mass loss for these glaciers, using the worst-case scenario, Representative Concentration Pathways 8.5 (RCP8.5), suggest a sea level contribution of 9.1–14.9 mm by 2100. RCP8.5 implies an additional global temperature increase of 3.7 °C by 2100, approximately four times larger than that which has taken place since 1880. We infer that projections forced by RCP8.5 underestimate glacier mass loss which could exceed this worst-case scenario.

CNN discusses the research findings and places them into a wider context here, and NBC Climate Unit also cover this story in their year-end review, here and here.