Oxygen, turbulence, and life in the oceans 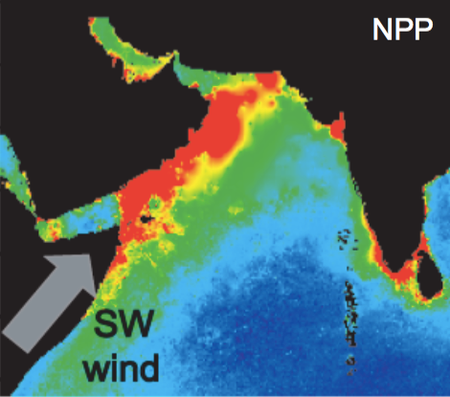 Phytoplankton growth along the Somali coast, driven by upwelling of nutrients due to the spring-time monsoonal winds

The models used to predict future oceanic climate show a tremendous range, even in their attempts to reproduce current oxygen levels.   This is in part because of the very sensitive balance between biological productivity at the surface, bacterial respiration of its detritus at depth, and physical transport of oxygenated waters into low oxygen regions.  Matters are worsened by the fact that critically-low oxygen waters produce nitrous oxide -- a powerful and long-lasting greenhouse gas -- and the total volume of suboxic waters is an extremely sensitive to small changes in models.

CAOS professor Shafer Smith and researchers at NYU Abu Dhabi have developed a broad program to better understand how models can get oxygen right in one of the regions where climate models do the worst:  the northern Indian Ocean.  In a recent paper, they've shown how ocean eddy transport sets the extent of the Arabian Sea oxygen minimum zone. In another, they've found that the increase in Monsoonal winds expected with a warmer planet will likely exacerbate Indian Ocean deoxygenation.