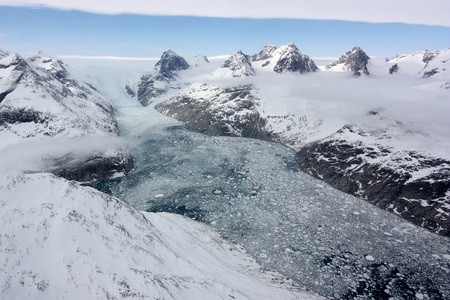 Icebergs are formed by calving, a natural process during which the ends of marine terminating glaciers break off and fall into the ocean. In Greenland, glaciers often terminate in narrow fjords with complex geometries, in which large iceberg becomes stuck for many months, freeze together, and form a sea-ice/iceberg mixture known as the ice mélange. A persistent rigid ice mélange freshens and cools the near-glacier ocean water and provides backstress on the glacier front, both of which may prevent or delay further calving. Being able to model the ice mélange and its effect on the glacier/fjord system is thus an important step towards understanding glacier stability.

CAOS PhD student Irena Vaňková (soon to start at the British Antarctic Survey) and professor David M. Holland explored the possibility of modeling the ice mélange as a continuum, because that is the way sea ice is modeled in the state-of-the art climate models. In their model, published in this paper, icebergs are incorporated within a continuum sea-ice model as thick and compact pieces of sea ice, held together by large tensile and shear strength selectively introduced into the sea-ice rheology. Idealized examples demonstrate that their mélange model is capable of representing physical situations observed in nature: polynya formation, sea-ice/iceberg and iceberg/iceberg interactions, and iceberg trapping by dense sea- ice cover.